Decoration Day (or Memorial Day, if You Prefer)

The National Moment of Remembrance, established by Congress, asks Americans wherever they are at 3 p.m., local time, on Memorial Day to pause in an act of national unity (duration: one minute).The time 3 p.m. was chosen because it is the time when most Americans are enjoying their freedoms on the national holiday. The Moment does not replace traditional Memorial Day events; rather it is an act of national unity in which all Americans, alone or with family and friends, honor those who died for our freedom. It will help to reclaim Memorial Day as the sacred and noble holiday it was meant to be. In this shared remembrance, we connect as Americans.
~*~*~*~*~ 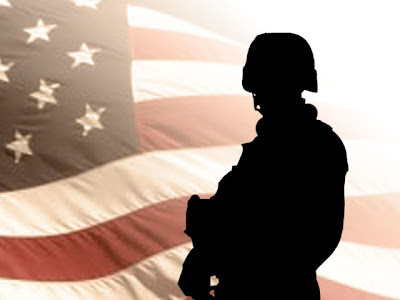 I have never been able to think of the day as one of mourning; I have never quite been able to feel that half-masted flags were appropriate on Decoration Day. I have rather felt that the flag should be at the peak, because those whose dying we commemorate rejoiced in seeing it where their valor placed it. We honor them in a joyous, thankful, triumphant commemoration of what they did.
~Benjamin Harrison

I am an American Soldier.
I am a Warrior and a member of a team.
I serve the people of the United States and live the Army Values.

I am disciplined, physically and mentally tough, trained and proficient in my warrior tasks and drills.
I always maintain my arms, my equipment and myself.
I am an expert and I am a professional.
I stand ready to deploy, engage, and destroy the enemies of the United States of America in close combat.
I am a guardian of freedom and the American way of life.
I am an American Soldier.
~*~*~*~*~

No ... this is not my "standard" type of post. Usually, you'd find an opinion - some confrontation - or an attempt at justification of why the military is not only needed in this country, but the most honorable gift of service one can give their country. Rather than posting a great deal of opinion, encouraging those who feel differently to focus on their argument, I decided instead to post three short pieces that each give a different view of the importance of the holiday in hopes that EVERYONE would focus on what is really important.

God bless you for your service to our country, Dana.

I wish we had a flag to put out today, but the Evil Twin can never find one to his liking... He's so picky!

I bet Patton had a problem with Memorial Day. After all, "You don't win by dying for your country; you win by making the other Son of a Bitch die for his." Man, I dig that bastard. Cheers!!

Matt man got it right..

Wonderful post Dana. I'm on my way down to the square for our local celebration. It's been raining all morning, but I'm sure it will take place anyway.

Have a great Memorial Day.

The men in my family have served in WWI, WWII, Korean War, and Vietnam. I've always wanted to join, but I knew the military would not accept me. At least I do my part by being involved in the community.

Great post Dana. The creed gave me goose bumps, and I think serving his country would be an honorable thing for Cam or any young man...or woman.

thank you Dana for your own personal service.

Whoo--ahh! And thank you for YOUR past service.

Great post Dana. Thank you for the Soldier's Creed. Excellent.

I enjoyed reading the Soldier's Creed. Thank you for sharing.

The quantity of soldiers there is less - the occurs wars on globe less.