*That got kind of morbid quickly, didn't it?*

*Do you think honesty is important to me? I can work with just about anything else, but if you lie to me? It's not going to work*

Bonus:  What 5 things will you never share on social media?

For anyone who missed it, this was my Sunday Secret yesterday ... 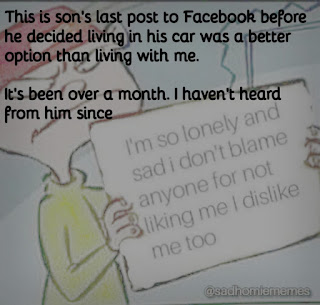 I suppose this was a long time coming. I had to "rescue" Cam from Podunk shortly after Mike and I moved to Las Vegas. Cam found himself at the wrong end of an armed robbery (marijuana involved - in his apartment) and then an eviction.

Because of the dynamic between Mike and Cam (tumultuous is an understatement), Cam moved in with my mom. She supported him financially for a year. When my relationship with Mike went to shit and I needed to find a place of my own, I was excited to include Cam in my move.

I found a PERFECT solution - a condo with 2 master bedrooms. This gave Cam his space and me my space. That was in late October 2017. Cam was attending college classes at a local community college ... it seemed things were on the right track.

Then my dad died in early December. Cam and I delayed the trip to Washington so that Cam could finish his finals. We went to Washington, took care of business, and drove dad's 1999 Suburban back to Las Vegas.

It was at this point that Cam decided college wasn't his gig (not surprised - I tried desperately to get him on the vocational school track).

I was patient - letting Cam find his way, but in early February I set my foot down - either go back to school or get a job - sitting in your room all day playing Xbox is not an option.

I reminded him of this weekly.

In early March, he lost his mind, and his temper. He was out of control. He was punching walls and screaming at me. I remained calm and told him that this was NOT okay - he could not behave this way and live in our home.

He left a week later.

I didn't kick him out of the house - I just set boundaries - boundaries he thought were unfair.

He packed up his room and left.

Although I've texted him, he has not let me know where he is or what he is doing.

I did snoop a bit - looked at his call history on his cell phone - and it appears he is in Utah. This is actually the best place he could be. He has a buddy who is in the Air Force and stationed at Hill Air Force Base in Utah. It looks like this might be where he is.

In a span of six months, I lost my (six year) relationship with Mike. I lost my dad. I lost my son. 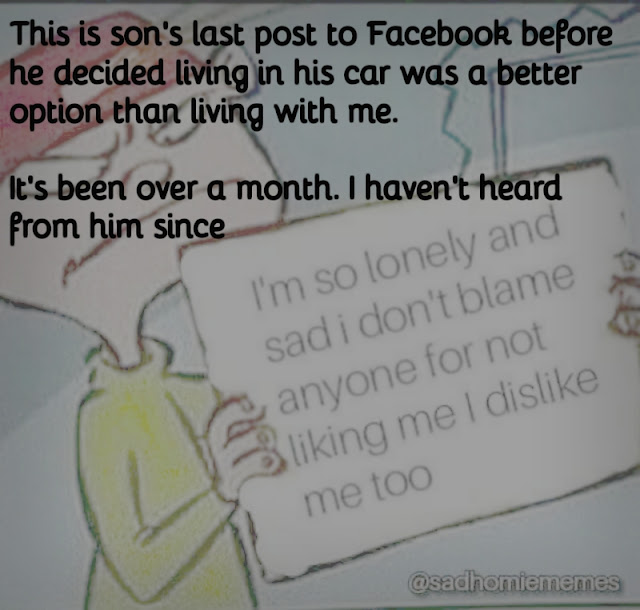 1. Write your 3 sexual commandments and share them here at TMI Tuesday.

2. Tell us your 3 D’s of relationship destruction.

3. WikiHow lists several steps to seduce someone Using Only Your Eyes What are your top 3 moves of seduction?


Seduction is definitely NOT my strong point - I just want to know that you are interested in me rather than me having to convince you to want me. So, working under those assumptions, my top three moves of seduction are:

4. What is your sexual healing?

5. Would you attend a class that taught you how to have an orgasm?

Bonus: In which areas of your life are you overly confident?


1. To prepare for this week you will. . .
a. Do 100 push-ups a day
b. Fall asleep to acid house
c. Drink gasoline for breakfast
d. Play TMI Tuesday


By default? D!! I'm sure as hell not doing 100 push-ups a day - I don't know who/what acid house is *get off my lawn* - although I do like a strong cup of coffee, gasoline seems a little extreme. Yep! D it is!!


Possibly? Definitely not outside the realm of my acceptance.


I just cannot imagine that in our vast galaxy, we are the only intelligent (well, some of us), living beings. So? Yes!!

5. What is your favorite game to play that a lot of people have never heard of or don’t play?


Pinochle? Cribbage?? I don't know ... I have a lot of GET OF MY LAWN readers who are likely familiar with these two card games, so not sure if they are rare these days or not.

Bonus:  What’s the most amount of money you’d be willing to spend on:
– Car?


I'm willing to spend as much cash as I have in my pocket. I despise car payments.


If I'm renting a home? I'll try to get away with $300 or less. If I own my home? I'll pay top dollar for quality furniture. Why the difference? I'm practical - if I'm renting I never know if my furniture will fit in my next place I might live. No need to spend a lot of money and then not be able to use it later.

Any other shoe? I really hope I can find what I need for $30 or less.


1. Would you rather be the smartest or hottest man/woman in the room?

2. Do you get aroused by hearing the sexual moans and noises of others having sex, e.g., neighbors, people next door in hotel room?

3. What are some small things that make your day better?


Small things that make my day better? A surprise text from a friend. Something in my mailbox other than a bill, advertising, or an unsolicited offer for something I don't want. Humming birds hanging out on my patio.

4. It’s the night before Christmas and you hear footsteps on the roof — what do you do?


Yell at the neighbor to quit drinking so much tequila? Funny story, this happened in Las Vegas this weekend ... on Easter Sunday.


You know? As long as I am not jarred awake by an alarm clock, a smoke alarm, or someone breaking into my apartment? That's an ideal Saturday morning!


You know? As long as I am not awoken by an alarm clock, a smoke alarm, or someone breaking into my apartment? That's an ideal Saturday night!

My ideal Saturday night ... a bed picnic with Chinese food and someone I really like, while watching a cheesy romantic movie like Ghost, Beauty and the Beast, An Officer and a Gentleman, or Pretty Woman.

Bonus: What is the craziest, most outrageous thing you want to achieve?


I mentioned this in another TMI Tuesday or Sunday Stealing post recently - the craziest, most outrageous thing I want to achieve at this point in my life it to attend culinary school and start a new career as a chef.

No Secret - No Stealing

This is in no way one of my traditional Sunday posts. Y'all know I usually go with Sunday Stealing, or a Sunday Secret. Not today ...

In what can only be explained as a crazy turn of events, I have set up a GoFundMe for Mike ... yes ... that Mike.

In a nutshell, Mike traveled to Albuquerque, New Mexico, last week to begin 4-weeks of training with his new employer, eventually taking that knowledge to Madison, Wisconsin where he would open a new location of that same restaurant.

3-hours into his first training shift, in a freak accident, he ruptured both of his quadriceps. That is a significant injury, however, due to a delayed diagnosis and care plan (48-hours after the injury), he developed acute compartment syndrome - a medical emergency.

An emergency fasciotomy was performed - large incisions were made on his inner and outer thighs in an attempt to reduce the swelling, and save his legs. Those incisions remain open as he continues to go through negative-pressure wound therapy in an Albuquerque hospital - far away from family - and probably for at least another 30-days before he can be medically transported to a hospital in Wisconsin to continue his treatment and eventual rehabilitation.

I cannot imagine being so far away from one's support system, in a strange city, literally fighting to keep your legs. It's got to be beyond terrifying.

Look ... I'm terrible at asking for donations/fundraising ... I do not like to do it. And in this situation? Many of you probably think I'm absolutely nuts for doing exactly that, but my relationship with Mike went from being all about what he had done to me, to not being about me at all. Compassion kicked in.

All funds raised are going directly to Mike - not to or through me. He's using the funds for non-covered expenses - the eventual medical transport to Wisconsin likely eating up the majority of raised funds. If you are so inclined, I know Mike would appreciate the assistance.
Posted by Dana at 8:00 AM 0 Who spoke up