When I first heard this term, I thought is was related to some new D/s role play phenomena, but noooo! It's the new Easter Bunny/Tooth Fairy/Santa Claus. That's right parents! Now there is another lie for you to tell your children!

The Switch Witch sneaks in Halloween night and replaces a child’s candy with a toy. The child needs to leave one piece of candy on the doorstep to let the Switch Witch know they want to give up their candy, and, when they go to bed, they need to leave their Halloween stash next to them. When the child wakes in the morning, the candy is gone and the Switch Witch has left a new toy!

Teach your children moderation. One or two pieces a day. If they sneak candy from the stash then you throw the entire stash away.

Keep your little urchin home on Halloween instead of parading them around the neighborhood in some ridiculously expensive costume that they'll wear for only a few hours in their entire life just so you can hear all of the neighbors say, "Awwww ... isn't little Johny adorable!"

And get off my lawn!

Focus on the Prize


Almost two years ago, I wrote a post about Dove's Real Women campaign (you can read it HERE).

In a nutshell, I believed then - and still believe now - that Dove (Unilever) is doing little more than attempting to increase their marketing base.

Last weekend, Dove called for women all around the country to reserve one hour to help make a positive difference in a young girl’s self-esteem.

I actually like that call to action. It doesn't specify making a positive difference in a young girl's feeling of being beautiful, but rather focuses on self-esteem generally.

Yet I cannot get past their,"Help us create a world where beauty is a source of confidence for girls everywhere".

How about we focus on other more tangible and long-lasting qualities like intelligence or athleticism.  Why do we even need to address beauty - something completely subjective - as being a source of confidence?

Oh! And the funniest part of this? I learned of this campaign on facebook. My future (step)Sister-in-law had changed her avatar to the Dove Movement icon ... right after she spent the previous umpteen million posts begging for everyone to purchase cookie dough from her to help fund a trip for my niece to go to California to meet with a modeling agent.

My niece is a pageant participant and child model - she's 5.

As it's been a while since many of you have heard anything about Cam, I thought I'd give y'all a quick update.

Cam's first year at the therapeutic day school was nothing less than craptastic.  What we (I) thought would be a short stint in the "big house" turned into a battle of wills.  During our IEP meeting in the spring, we struck a deal - if Cam performed well during summer session, he would be able to begin transitioning back to his home high school in the fall.

It was if if someone flipped a switch.

His attitude and behavior improved beyond measure.

His grades were phenomenal (for him) - an A in world history, a B in English.

All systems were "GO" until the therapeutic day school balked - claimed they hadn't made any such commitment to the transition based on summer school (because there were only 2 classes and it was a self-contained session). I called for another IEP and set my foot down. I won. Cam earned it.

He is again involved in his first love (music), playing the bass drum in the marching band and the oboe in the concert band.


*NOTE* For all of you "My little snowflake is in honor society and always gets a trophy" bumper sticker parents - FUCK YOU! My kid is as imperfect as the come, but he's making significant changes and I'm proud!

Cam's academic/behavioral achievements also earned him Driver's Ed.  He got his driver's permit last month and refuses to let me drive anywhere any more.  For all of you parents of tweens who won't have anything to do with you?  Good news! They want to spend time with you again when they get their driver's permit.  But something tells me this is the last HOO-RAH.

Unfortunately, not everything has been de-thorned roses.  Cam continues to make poor choices regarding friends and "extra-curricular"activities, and those choices continue to bite him in the ass.  A few weeks ago those choices resulted in the police coming to visit us at 2AM to question Cam regarding an incident involving drugs (weed) and a machete.  Fortunately, he was not in possession of either of those items, however he was with the group of kids where both of those items were present.


I don't usually get involved in political protests. The masses usually come across (to me) as people looking for attention without being informed. Especially when they hang out with people like this chick. 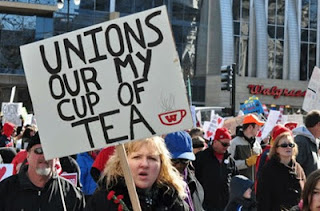 (If you research this photo and send me an email telling me it's altered,
I will hunt you down and write misspelled words on your forehead)

But??  I'm (probably) going to make an exception on Monday.

Sears corporate headquarters is on land that should provide tax funding to my son's school district.  23 years ago, in an effort to attract Sears to Illinois, the state provided economic development area (EDA) status to the property Sears purchased and built their corporate headquarters on (you can read more about it HERE).

For the past 20 years, Sears has received a HUGE tax break.  That tax break is scheduled to end next year.  Sears has been threatening to leave Illinois.  The Illinois Senate is voting on an amendment to extend the EDA another 15 years, essentially taking $200 million away from the school district.

I am not one who gets into state politics - especially in Illinois (waste of time anyone?). In fact, I've never participated in any type of march on a State Capitol, but ... but ...

Well, I think this is extremely important.  Rumor has it the real reason Sears is "demanding" the extension of the EDA is because they want to have the option of selling the property should they get a better deal from another state, and the EDA is a great selling feature in the current depressed real estate market.

The school district has the kids all riled up about this (of course), and Cam is certainly old enough to grasp a basic understanding of the impact of this legislation.  It's about time I got all hippie mom, march on the state capital with him, don't you think??  Hell, he'll be able to vote in the 2016 Presidential election.

And there might even be a dinner with Sujomi in the deal for me.

While I was away, I spent most of my time obsessing over enjoying tumblr. My natural way of learning is to immerse myself in the interest du jour - try to figure it out - and once I do, become extremely bored with it. If there isn't a challenge, I have little interest

I learned quite a bit about social media while I was drowning in it, and thought I'd share a few of those lessons ... 'cause I'm a giver like that

*DISCLAIMER* This post is filled with sweeping generalizations that will likely offend some. I don't care - being politically correct is too cumbersome and wordy, and no matter how hard you try not to, you'll always piss someone off anyway

Or so I thought

It was fun in the beginning. Mindless. Required very little thought or planning. Expectations were minimal. Then I dared to write a post in response to something someone else wrote

I was called negative. Told I didn't belong in the community. Reminded that people go to tumblr to escape and I was too serious. Nastiness ensued

It wasn't like I hadn't seen that kind of behavior before - the passive aggressive, write a post, take it down bullshit, then bitch when you learn I subscribed to your RSS feed and I call you out on your nonsense

I imploded - deleted my tumblr - threw a tantrum

Then I became on of "those" people and rebirthed my tumblr. I should have stayed away. It didn't get any better

I found one or two actually bloggers, but the rest? They just found themselves the hipster version of facebook and thought they were better than those people

I really do need to write to process things. It gets the thoughts unstuck from my brain.  That doesn't mean my writing will be good, or even entertaining, but it does mean that the thoughts won't be banging around, bruising my brain

Here?  This is my space (not to be confused with MySpace). No one can tell me I don't belong here

Well, you can, but I won't listen! 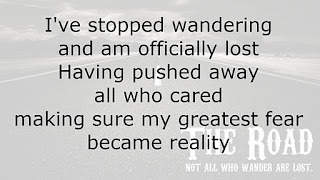 It's time to come back to where I started - to refocus

I'm not sure what it will look like here

Whether the negativity and self-loathing that I've been nurturing elsewhere will follow me, or whether I'll be able to start wandering to a better place

I'm hoping for the latter