Your Blackout Is Invalid 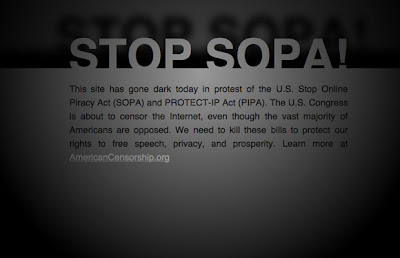 I intended for this post to be a discussion regarding the value of SOPA and PIPA as additional tools - questioning whether they infringe on the rights of others to protect the rights of intellectual property owners ... but then I had a moment of clarity.

My irritation with what I was reading wasn't rooted in the fact that I overwhelmingly supported SOPA/PIPA (let's be honest - there are some significant concerns regarding the DNS provisions in both), but that what I was seeing was uneducated slacktivism that reeks of entitlement.

Uneducated - Many (most?) of those I talked to believe that SOPA would cause them to lose their right to free speech. Tumblr, twitter and other forms of social media would be CENSORED (the favorite go-to word of those who want you all up in arms about something you know nothing about). The internet would be monitored and they somehow wouldn't be able to get whatever it was they wanted to get.

Slacktivism - Most of what I saw yesterday was nothing more than that feel-good online activism that has little (if any) political or social impact. The retweets, reblogs, join this facebook page method of convincing yourself you are eliciting change when in reality you are doing nothing.

That reeks of Entitlement - There seems to be some underlying fear that what people should pay for (music, movies, etc.) and are currently able to secure via internet piracy for free, might be taken away.

OH.MY.GOD!! You mean SOPA/PIPA might make it more difficult for me to download movies illegally??  That's CENSORSHIP!!

No ... that's holding people accountable for their illegal activities ... activities that infringe upon the livelihood of those who own the intellectual property.

"The Internet Should Be Open And Ours" is the new battle cry.

Everyone wants that First Amendment right.

The problem is that they want it without the responsibility that comes with it.

Do you want SOPA/PIPA to go away? Do your best to use the internet responsibly. Pay for the things you should be paying for. Stop looking to get something for nothing. Support the owners of intellectual property rather than supporting the people who are stealing from them.


If I followed my "Things that identify what is important in my life" theory - and I wanted to be successful with my 2012 TO DO list - I'd list items like 'waste time on social media', or 'drink more beer and vodka'.

I'm hoping to be able to look back on 2012 and cross off the following items: 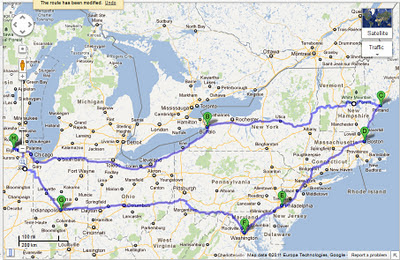 Last year I threw up a 2011 To-Do List ... as a means of accountability.  Looking back on it this year, I think I might just throw up!

Let's reflect, shall we??  Actually, before we do that, let me say one thing.  The things I didn't accomplish? Those kind of were more enlightening than the things I did accomplish.


I've learned there are two things that really identify what is important in your life:
Priorities can always be determined by looking back on those two items.

I think I'll be a baseball player! 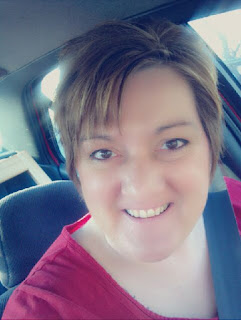 *Gratuitous pic of new short, sassy doo ... because someone asked*

A Picture Can Speak A Word Or Two 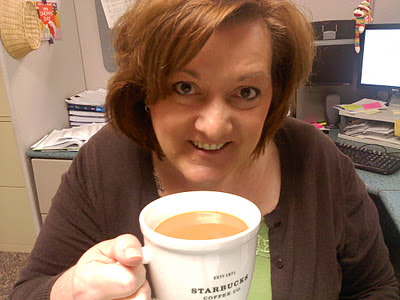 This picture is fairly significant.

Well, because it's likely the last photo you'll see of me taken with my trusty, loaner LG EnV3 (I just checked - the Droid X2 - my very first smart phone - is on the FedEx vehicle for delivery).

It is one of the last times you'll see me with all of this hair!

See? A strange thing happened.  I had this haircut 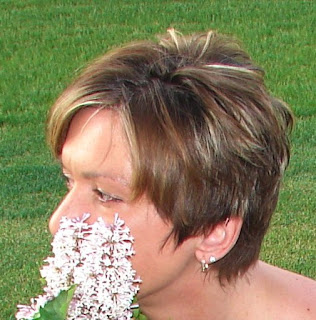 about 4 ... maybe 5 years ago. It was the first time in decades (literally) that I had worn my hair short. I liked it - it was easy to style - it was sassy - and I was frequently complimented on it.

Then I started gaining back all of the weight I had worked so had to lose, and as I did, my hair got longer and longer.

My self confidence waned - I just wanted to hide my face - and although I will admit to plucking the occasional chin hair, I wasn't able to grow a full beard to accomplish face hiding.

It wasn't intentional - definitely a subconscious thought - but when I was asked recently why I quit wearing my hair short - why I was hiding my face (not the exact words, he might have used "pretty" somewhere in there) - that little cartoon-ish light bulb lit up above my head and I realized that was exactly what I was doing.

Tonight, at 5:00, I have an appointment at the salon. I'll be going back to sassy me, highlights and all.

This year is about learning to take care of myself. Treating myself as well as I treat others.  Allowing myself the occasional want instead of requiring everything to be a need before I designate myself worthy of having it (and sometimes, not even then).  It's about taking care of myself - physically and emotionally.

Balance that I lost over three years ago and haven't made a priority to regain.


I could have sworn I've done this in the past, but I'll be dammed if I can find it.  Oh well, that won't stop me from doing it this year!
*shamelessly stolen from Os*

JANUARY - I've often thought the whole New Year's celebration thing was highly overrated (Where I waxed poetic about a TO-DO list rather than New Year's Resolutions).

FEBRUARY - Hey! Where have y'all been? What? Y'all have been around, but I haven't? Maybe if I had a pair of Chuck Norris' ACTION JEANS I'd be kicking ass and taking names, but alas, my pajama jeans aren't having the same effect (Continuing struggles with Cam).

MARCH - That he's not 18 yet?? It seems like it was forever ago that he was this adorable little ball of fluff - drooling and dripping all over me (My standard March 1st blog post).

APRIL - I fear that if I let you inside the walls you'll find nothing in there that you'll want (Sunday secret).

MAY - There! I said it, but it might surprise you to learn just how much anxiety has taken over basic functional parts of my life (Where I discuss my inability to talk to strangers).

AUGUST - I have been an organ donor since getting my license (over 3 decades), have been a regular blood donor since turning 18 and pay an extra $25 per year to have a Donor Awareness license plate on my car, proceeds helping support organ/tissue donor awareness efforts across the state (Where I encouraged everyone to explore Be The Match registry).

OCTOBER - I've stopped wandering and am officially lost having pushed away all who cared making sure my greatest fear became a reality (Sunday secret).

NOVEMBER - Every day I hope my demons will never turn into your demons (yet another Sunday secret).

DECEMBER - I have an aunt and uncle who are very dear to me ... far more like parents than my own parents were (Sharing a piece of a handwritten letter from my uncle).

After reading Emmy's A Rant And A Challenge post, I'm going to try to get back here more frequently.

Yes ... I know ... I think I said those very same words at least 7.2 times last year, but maybe they'll stick this time.