I was doing a little reminiscing not too long ago and decided to google the address of my childhood home. When I found the latest real estate listing, I was surprised by how little it has changed. The landscaping is a bit different, the lot is now fenced, there is a flag pole in the front yard, and there are a few other cosmetic changes and updates inside, but overall? It looks very much like it did in 1966 when my parents bought it new.

That window on the far left? That was my bedroom from the time I was 2 until I moved out at 19. There was one winter when the snow drifted all the way up to the bottom of that window - extremely unusual for the Seattle area. That is also the window I used to look out from for hours, waiting for my alcoholic father to make it home safely from whatever bar he was at that night.

That driveway? It's where I dropped and shattered an empty mayonnaise jar (I was catching bugs) when I was 8, then tried to pick up the shards of glass with my bare hands so I wouldn't get in trouble. I sliced open the side of my right hand. I still have the scar.

It's also where my dad, in a fit of drunken anger, threw his keys at me, splitting open my lip, because I had been talking to a guy on the airplane we had just been on. A guy who was old enough to be my father. My dad accused me of flirting with him and called me a slut (I was 14 - the guy was helping me with my calculus) right before saying, "I'll make sure you never think you're cute enough to do that again!"

17 years of my life, and as I sit here thinking about it, I can't come up with any great memories. In fact, it was a prison in many ways. There were some really terrible things that happened behind those walls, and as long as they stayed behind those walls, everyone thought we were the perfect family.

This house is full of secrets that no one ever saw or heard about.

I hope the people who have lived there since have filled that house with enough laughter and joy to make up for the 17 years of on-again, off-again, terror that I experienced here.

I have some social media pet-peeves. I know ... I know ... that surprises all of you, but I swear it's true!

One of those pet-peeves is when people post photos of people for the sole purpose of making fun of them.

What's that you say? It's no big deal? Everyone does it? I just don't know how to have fun?

Is it still funny?

Recently, my mom posted this photo on Facebook. The reference to it being taken in South Carolina is a dig at my aunt and uncle who lived there for years. 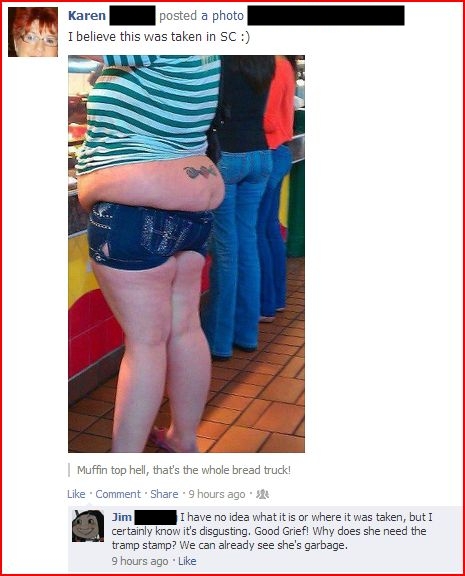 If that weren't bad enough, my dad adds his opinion.

Why not just plop me back in 1979 and have me relive my teen years. I've been on the receiving end of this nastiness from these two people more times than I care to count. And 30+ years later they're still at it?

If this were any of my other non-related friends on Facebook (or tumblr or twitter), I'd just unfollow. I don't see the entertainment value in making fun of others - even strangers. If that's your thing, go for it, but I choose not to be a part of it, or a part of you.

But this is family, and not just distant relatives, but my parents for goodness sakes! Unfriending or blocking them would be ... I don't know ... I just can't go there. But EGADS!

When The Words No Longer Get Stuck In Your Head


It wasn't that long ago when words got stuck in my head. When the only person who would listen to me was blogger. When I thought I would go crazy if I didn't get the thoughts out of my head.

Looking back, it's clear that I was lonely, even when I was still with husband. Writing here was my way to find validation and companionship - not in a I-want-to-be-internet-famous way, but in a way to simply be acknowledged as human.

Now? I have a relationship with someone who validates me every day (validates is not euphemism ... although I'm sure Mike wishes it was).

I want to write. There is a part of me that misses writing - attempting to put my thoughts in print so that they make as much sense to anyone reading them as they do when they are bouncing in my head. This blog has been my friend when I felt there was no one else who would listen. It was important to me, and I feel kind of bad to have tossed it aside recently.

It's not like life has been boring I last wrote a month ago, in fact, life has been churning right along at a much faster pace than two years ago. Here are a few examples.
See? I do still have a life, but it is one with less drama and more love, and it appears that equates to less blogging.