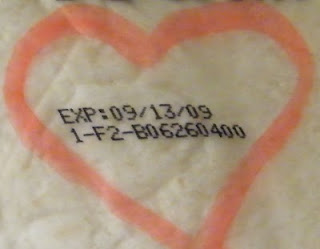 For the past 20 years, the 4th of July has been far more than just a celebration of U.S. Independence. My husband Alan - who died by suicide - was born on July 4th. A day filled with celebration, fireworks and brats on the grill became a day overshadowed by grief.

I thought I should be over it. I mean everything has an expiration date, right? Milk, eggs, over-the-counter medicines - there is a time we need to be done with them - throw them out. Seems like grief should have an expiration date too - an acceptable shelf life of say ... 6-12 months? And then it should be trashed, lest you be willing to hear that you are wallowing in self-pity, playing the victim or being a martyr.

Maybe it's just that we all - at some level - fear facing such a loss. Giving ourselves 6-12 months is merely a hope that it won't take longer than that to recover. After all, this won’t happen to us, but if it does it will only be bad for a short, finite amount of time. Then the grief expiration date kicks in and all is magically well. *sprinkles sparkly fairy dust here*

I've heard time and time again that I should "get over it" - that 20 years is far too long to hold on to grief - and so I shove it below the surface where people don't notice. I don't talk about it, and people don't ask ... and it festers.

20 years after losing Alan, I still think of him, and sometimes that makes me sad, puts me in a funk, or makes me cry. The reality is I'll never be "over" it, nor should I be. I love Alan, and his suicide produced a significant change in my life. It doesn't mean that I can’t lead a happy life, it just means that on some days, like the 4th of July, being happy - not pretending to be happy - still takes a lot of hard work.

Like my love for Alan, grief doesn't have an expiration date.

Sadly Dana, you are so right.

I came across your blog, and spent over an hour reading the archives. I just want to send you a big HUG and to tell you that you are one brave woman.

we're doomed, I think coming to that realization can be helpful though.

In3Dee, thank you - for taking the time to read and for the hug!

I don't think you ever get over that. I'm sorry for your loss. Now and always.

There's no getting over the death of any loved one. You move on with your life, but you never just get over it.

i think they were right
and i think it applies to grief too....

and
i agree about you being brave.

A therapist once told me that you'll grieve for certain people for the rest of your life on certain days, at every funeral you attend, etc. She also said that's normal and healthy. I agree with that...

I'm sorry for your loss. I agree that grief has no expiration date. I get down over the loss of my parents, but I'm also grateful I had them in my life as long as I did. {{Hugs}}

Grief does not have an expiration date.I have lost loved ones that while I do not think about them every day, every now and again I miss them with a breadth and depth that surprises me.

....and it should not expire. That was a big loss for you and really you may never get over it.

The important thing to note is that you are approaching it as a bad thing. Its not. Its part of you and will always be part of you.

So for those people who tell you to get over it, give them a gun and tell them to give it to a loved one to have them commit suicide and see if they want to set the example.

I mean, that is just cruel to have someone come to you and tell you to "Get Over It". These are the type of people you don't need in your life....

That is a strong love that you have for him and that is a wonderful thing. Most people have never loved someone so much. Grief does not have a time line. It'll get better and then it will kick you in the face again. Gotta love being human. Feel what you feel and be glad that you do feel.

I still miss many people. Sometimes I'm sad about them being gone, sometimes I smile because of the memories, but I'm never "over" their passing. Cheers Dana!!

I am sorry for your loss. Suicide affects generations to come and is as sad as sad gets that anyone can get to that point.

I like that you can express your love for him, and I think there is no expiration on that.

I understand. Just when I think that I am "over it" something comes along that triggers it, re-releasing the grief that I thought I had bottled up inside. It scares me how it can still be as fresh and raw as the day I lost my loved one. You're right, it does not expire.

So interesting! I don't think that I will ever be "over" losing my mom. However, to be honest, in the last year or so, I have some moments of closure and the pain has gotten less immediate.

I'll be thinking of you this weekend.

Aunt Becky, maybe not over, but at least through?

Jay, I think I've been stuck in moving on and not moving forward - big difference.

k bare, this brave thing honestly baffles me, but I will accept the compliment!

Gina, damn therapists think they know everything, don't they? :)

Evil Twin's Wife, I am certainly looking at this from a little different perspective this year - one that I think reflects some personal growth.

Another Suburban Mom, maybe it's not grief that has an expiration date, but the amount of time people are willing to hear about it?

Joker_SATX, actually, for the first time in a long time I am NOT approaching this from a negative, although I can see how this post might not reflect that. I've got a surprise for Sunday :)

Average Chick, it was the first time I ever loved with reckless abandon, but I don't want it to be the last.

Matt-Man, I'm starting to smile more, and I *like* that!

jewel, I know people go through the "standard" grief steps, but I can honestly say that I Was never angry with Alan. The love was always there.

Sedorah, I understand and have felt that welling up of emotions that feels identical to the way it did 20 years ago.

Karen, I do think there is a societal difference in the way suicide is perceived over other ways people die - that somehow there is less empathy for those who die by suicide (I frequently hear about how SELFISH Alan was) than there is for someone who has lived a good life and is struck by some horrible ailment. It really is interesting.