~*~*~
As most of you know, I was kind of dreading Thanksgiving - by far my favorite holiday. Plans to head east for a blogger-Thanksgiving fell through (on my end) and I started throwing myself a pity-party.

Early in the week, I became rather disgusted with my shitty attitude and decided to see if I could find somewhere to spend my Thanksgiving helping others. Apparently everyone else was thinking the same thing!

The United Way puts on a big Thanksgiving Community meal at a Cultural Center near (defined as less than a one-hour drive) Podunk. I called them to see if I could help out. They had all of the volunteers they needed, but if I wanted to drop off a pie ... uhhhh ... no ...

Next call was to the Salvation Army near Podunk. Again, they had all of the volunteers they needed for serving their Thanksgiving meal.

Defeated, I decided I'd cook the turkey for Cam and I and celebrate anyway, but then something magical (like unicorns and rainbows magical) happened ...

Y'all know Aunt Becky from Mommy Wants Vodka (NOT to be confused with Vodka Mom who may or may not have changed her blogger identity to ride the coattails of a more well-knows name), right? Well, she and The Daver (and Ben, and Alex and Amelia too) live about 45 minutes from me. I had made several attempts to meet up with her (i.e. said I'd head her way and never did), but social anxieties got the best of me ... until Thursday ...

I'm actually a little surprised she didn't ban me from the bright yellow house based solely on my level of flakiness in the past.

Seems our Aunt Becky and her family were going to be spending Thanksgiving alone, and I had a bacon wrapped turkey. Clearly this was a match made in heaven. 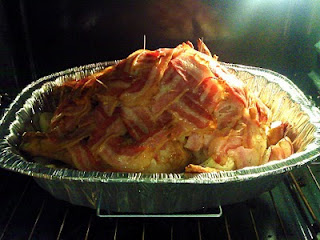 Late Thursday afternoon, me, my bacon wrapped turkey, the fixings for dinner (nothing says Thanksgiving like generic Stove Top Stuffing, instant mashed potatoes, jarred gravy and a can of jellied cranberry sauce) and my google maps route headed southeast (Cam spent the day with his girlfriend).

I knocked on the door and ... Ben answered (clearly our Aunt Becky sends her children to the front door as appetizers for any potential serial killers).

After drawing a quick flower on the Magna Doodle for Amelia, it was time to put together the rest of dinner ... and it was good!

We sat, ate our meal and gossiped about you, and you, and especially you. I also uncovered ALL of the secrets of becoming a famous blogger. You know ... all of those secrets that our Aunt Becky keeps to herself so she'll have no competition for readers? Mmmm Hmmm! It's amazing what you can get out of someone when you bribe them with a bacon wrapped turkey.

Dooce better watch her ass 'cause my blog should be going viral, just like a double rainbow, any minute now!

Now, I'm sure y'all are expecting pictures of our Aunt Becky, The Daver and their merry band of crotch parasites, but alas, there are none! Why??

Well ... SHHHHH! Don't tell anyone, but our Aunt Becky is really a man. That's right! And The Daver, Ben, Alex and Amelia?? Yeah ... she ... ummm ... HE gets them from Rent-A-Center whenever there is a need to prove mommy blogger status.

Ohhh the stories I could tell ...

Unfortunately for all of you, our Aunt Becky (Uncle Pervy) swore me to secrecy ...

Secrecy? Let's get a little truth juice in you and see how long it takes you to spill the beans on Aunt Becky. LOL

Glad you had a nice holiday after all. Aunt Becky is the bomb!

we're doomed, there will be no truth juice admissions! Besides, we all know what happens whenever I meet up with a blogger, don't we?? *wink*

Karen, odd, she said the same thing about you! Really!!

I've been out knocking on doors and had kids open the door up. I'd ask 'is your mom or dad home?' Nope!

I'm not going to nag you about telling us all Aunt Becky's secrets. I believe we all have the right to privacy and whatever alternate story we care to tell. SMILE

Oh, what a fun holiday gathering. I'm sure you all laughed the whole time. :-) Next time you go, tell her I said "hi!"

That sounded like a great time! Good for you!

HOW DARE YOU TELL THE WORLD THAT I'M REALLY A MAN!?!

My secret is OUT! DAMMIT!